Big Hero 6, Disney’s answer to Hero Movies, won an Oscar for Animation, made $56,000,000 dollars in its opening weekend and then went on to quadruple that in gross profit. It scored highly with critics and audiences alike, being described as ‘agreeably entertaining and brilliantly animated… briskly-paced, action-packed and often touching.’ 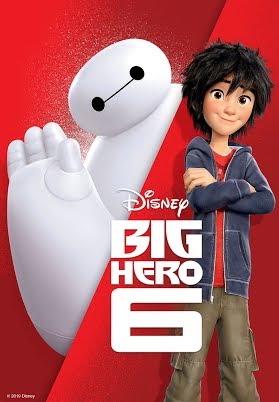 But to be honest, and otherwise unhelpful, I wasn’t a massive fan. Let’s start with the plot:- (Spoilers)

We are introduced to Hiro Hamada through a robot battle. Anyone who’s ever seen an episode of Robot Wars, Transformers, or Real Steel – this intro was for you. We’re brought in to think they’re giant robots doing battle, until the camera pans out and you see that it’s two people controlling their robots much like in the tv show Robot Wars. Except there’s no fun narration from Craig Charles. Hiro steps up to challenge the reigning champion and eventually wins. When the reigning champion acts like a child who’s had their favorite toy destroyed (because he essentially had that happen to him) he reacts to physical violence. Towards a 13-year-old. Now, up until this point (and we’re only a couple of minutes into this film), there hasn’t really been any danger for our protagonist, who we assume will be Hiro because he won and because he’s on some of the posters. It seems a bit extreme, but thankfully there’s an ex-machina ‘Older brother arrives on a moped to save the day’ moment so we can breathe a sigh of relief before watching a ridiculous non-car chase as the two brothers try to escape. I say try, because they both get arrested. Turns out, whilst battling robots isn’t illegal in San Fransokyo, gambling on these robot battles is. Who knew?

For the next ten minutes, we’re driven through the world through Tadisha Hamada’s eyes. He wants to encourage his brother to be a better person and to use his brain for something better. He wants to make his parents proud. He wants to show his brother his nerd school. And this is the bit where ‘fast-paced’ seems like a kind way to say ‘info-dump’.

When Tadisha takes his younger brother Hiro to his college/university, he introduces him one by one to Go Go, Wasabi, Honey Lemon and Fred. We’re then introduced to Callaghan, the professor of the university. This all happens very quickly, and we’re shown details of differing personalities of each. Here’s my problem with this. There are now so many characters that I don’t really care about any of them.

Hiro is a moody teenager, pure and simple. Tadashi is the kind soul who wants the best for everyone. Their aunt Cass has two minutes screen time, repeats the same joke as Tadashi, and spends most of her time talking about food and hugging people. Go Go is cold and aloof. Wasabi is clearly OCD. Honey Lemon is over excitable and Fred is the classic frat party stoner (who we later find out is also a billionaire baby). And we’re introduced to all of this information in a succinct fashion because? Because the characters will be important, and these little idiosyncrasies are what make them the heroes they’re going to become? Also, Tadashi has been at this school long enough that he’s tested Baymax 84 times before he works. He’s got his own workspace, and these people are described as his best friends; so how does Hiro not know about them until now? Why does it take Tadashi getting arrested alongside his brother to introduce Hiro to this school? ‘For stories sake’ isn’t good enough in my opinion. And it means that at 23 minutes when Tadashi sacrifices himself to save someone and dies – I felt nothing. Sorry.

There’s a clumsiness to the writing I didn’t expect. Casual Frankenstein references. The fact that when Baymax needs charging, he acts drunk rather than sleepy. Why? For the slapstick comedy? Of which there isn’t really any in the rest of the film. There are a few moments where Disney makes an effort to subvert our expectations. When The Eye of the Tiger starts playing, this is the moment when Hiro has no ideas or plan at all. Baymax makes a funny noise when he does the fist bump and has to deflate and inflate himself, which did make me giggle. But it was difficult to have an emotional attachment to anything other than Baymax. Hiro is clearly consumed by anger, and it’s only his friends that keep him from becoming Callaghan or another villain of the same ilk. And the fact Baymax becomes sentient enough to stop Hiro from removing his care chip. (That’s never explained by the way).

I’ve included the amount these films made to show that actually, Big Hero 6 ($222.5 mil) was average. I don’t expect Disney to be average. Disney should be miles ahead. The Book of Life is majority 20th Century Fox, and How to Train Your Dragon 2 + Penguins of Madagascar are Dreamworks and Fox. I’m not including that to slander either company. Far from it, they’re big games in animation. And that’s why I expect more from Disney. They are the company for classic children’s storytelling through animation. But even though Big Hero 6 is PG, it doesn’t really feel like it’s for kids. Certainly not kids old enough to understand the emotional distress Hiro is feeling, because he refuses to feel it. He shoves it out of the way until it’s useful in problem-solving. Or Baymax finally explains what he means by ‘Tadashi is here’ and shows the video he’s somehow recorded and saved.

1. Tadashi did something to engage the audience more than just save his brother. Like maybe being the sole caregiver, until Aunt Cass steps in once he’s died.

2. We got more time to get to know the friends and the university.

3. Everyone had known Fred had money and that was a joke from the start, rather than ex-Machina millions.

4. Baymax had had more personality. It is, after all, fictitious. He could be more sentient before he decides to protect his care chip.

So no, I wouldn’t spend any more money on this film or any sequels hereafter. I probably wouldn’t watch it again unless it was the only thing on television, and I certainly wouldn’t recommend it to a friend.

Let me know in the comments below if you agree or disagree or if you want to share your opinion. See you next week!