At this point, I’m wondering if giving up added sugar for my health is worth the health of those around me. Because, and I cannot stress this enough, I’m ready to straight-up fucking murder someone. 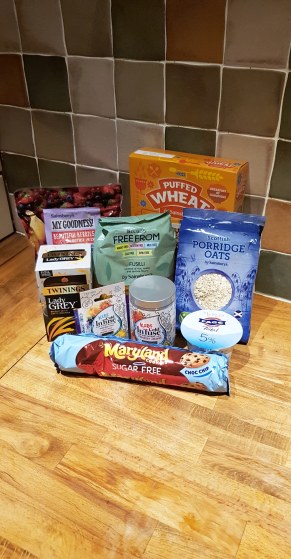 My week started with a food shop, where mum and I sought out sugarless or ‘no added sugar’ alternatives to things like breakfast cereals, tea, and juice – as these were going to be the three key things my life was going so to suffer without.

So let’s have a little run down of the products I got:

Porridge Oats – not the same without a dollop of jam.

Freefrom Pasta – So far the only team player I’ve encountered. Tasted the same in a Pasta bake on Day 2. Good work.

Sugarless Greek Yoghurt – Not usually a fan of Greek Yoghurt, but with the Tikka Cod we had for dinner Day 3, not bad!

Juice Infusers – You’ll get your turn you abominations.

Smoothie Mix you add water to – the only bit I’ve not tried yet, so they’ll inevitably get their own post.

And now we come to my ultimate disappointments. The shitcreek of saviors. The ones who promised it all and delivered diddly-squat.

Earl Grey Tea with a Zest of Orange and Yorkshire Biscuit Tea. 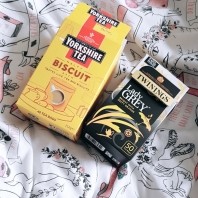 So I’ve tried both of these before, and had convinced myself they’d be perfect alternatives to a breakfast tea. The Biscuit tea is super sweet, I’ve only ever needed half a tea spoon to take away the bitter aftertaste – but that bitter aftertaste has only increased since I’ve been denied sugar.

As for the Earl Grey, the Zest of Orange promised a soft, floral alternative that was still FUCKING BITTER. The last mouthful of this is actual hell. I don’t know how people drink tea without sugar. I fucking love tea with sugar. But the bitterness can only be compared to reporting your Ex’s New Girlfriends bikini photos on Instagram as ‘pornography’.  Which I’ve totally never done… honest…

When I agreed to give up sugar, I knew the whole ‘no cake, no sweets, no chocolate’ part was going to be hard. I did not expect to have my favourite drink, and about 80% of my personality DESTROYED by not being able to have tea.

I’ve been in a foul fucking state all day. And all I get ‘yeah, you’re going through withdrawal’

NO FUCKING SHIT SHERLOCK! HERE I WAS THINKING I’D JUST HAD A PERSONALITY OVERLOAD AND TURNED INTO THE FUCKING SHE-HULK ON A WHIM!

People have always told me I can be aggressive and angry – which I am. But this is next level. My sister in law actually backed away from me the other day. People are responding to my texts like I’m their boss with a harsh deadline.

‘Well if that doesn’t work for you…’ ‘are you okay?’ ‘Is something the matter?’

Yes. Something is the matter. I’m juggling sugar withdrawal AND caffeine withdrawal and I’m fucking miserable.

‘It only lasts three days.’

Well I’m on day three, and you better HOPE it finishes soon or you’ll see my face plastered on the six o’clock news because I ran into my local Costa like I was robbing a bank, shot up the ceiling, and insisted they pour Peach Iced Tea straight down my gullet until I either died or the police arrived.

Also – before you repeat my mum’s advice of just having normal tea without sugar – get out. Just get the whole way out.

And have a nice day!

I woke up feeling immediate regret. I needed a cup of tea. I needed strong breakfast tea with a dash of milk and one sugar. Just one couldn’t hurt?

I resisted. I’d just drink water. Water is really good for you, I told myself. It’s great for your skin, helps regulate body temperature, oh, and it keeps you alive! As a line manager of mine once said, ‘Hydrate or die.’

So with a 1ltr and a half of Volvic Sugar Free at hand, I hid upstairs. There’s no sugar upstairs, I’d already eaten it all before the challenge started. Maybe if I physically avoided sugar I’d be able to resist?

Lina was having a much harder time. She works in a cafe, surrounded by sugary cakes. Somehow she managed to suffice with a bowl of cucumber. At one point, she explained, that she was going to stare at the cakes whilst eating the cucumber to see if that would trick her mind into thinking she was eating sugar when she wasn’t. Yeah… we can all guess how well that worked.

And then it was my turn to be tested again.

My dad is a Mason, and they host a charity bbq for the families every year. Our mission was to bring a pudding, as if life wasn’t cruel enough, so my mum created an Eton Mess (for the political irony).

‘I can’t eat that,’ I told her, more to remind myself that the cream and meringues had sugar in them.

‘It’s okay, I’ve put some strawberries aside for you.’

Five strawberries. Six, after she saw my disappointed face. They’d have to do, I guessed. I didn’t want to sound ungrateful.

They say when you lose a sense the others become more heightened. Well, I was neglecting my tastebuds, and my nose decided to overcompensate. It was probably psychosomatic but the moment I arrived at the bbq, all I could smell was sugar. It was in the BBQ sauce drizzled on the ribs, it was in the cheesecakes, cakes, and other sweet puddings on the counter. It was in every fizzy drink available.

I’d brought a bottle of water with me, filled with my Volvic Touch of Fruit, so that I didn’t need to break my pact on day one. We hung out for over an hour, chatting with people, buying raffle tickets, having a laugh and then food was served.

Now, there’s a lot of old people at these functions. And they took forever to get through the buffet. So by the time I got there, I was starving (didn’t have breakfast, in a stern attempt to avoid sugar) and just wanted to stuff my face so that I wouldn’t want dessert. I started with salad – no sugar in salad. Sausages, kebab, potato salad – couldn’t guarantee no sugar, but there weren’t many other options. The pasta salad probably had sugar in it, but was it worth fussing over right now? And then my big blunder. The mistake I should have seen coming.

A plump white roll, with powdered flour on the top. Fluffy. Soft. I didn’t even think – it went onto my plate. So did a rib. Well… it would be rude not to!

I sat down, and started eating. Took a bite out of my roll.

‘Well I wasn’t going to say anything,’ said the brother who did a nutrition module at uni.

How did I manage to fuck up on the first day!? I wasn’t even 24 hours in!! I handed the roll to my brother, who happily munched away on my roll (which I’d tucked the sausages inside, so I didn’t have those anymore either). Whilst I ate my probably-covered-in-sugar rib.

‘You did really well to stop yourself though!’ said Lina, the greatest cheerleader ever.

‘Better to fail on day one than day 21 when you should know better.’

It’ll be no surprise to most, if not all, of those who know me –

I hate my body.

This will have a positive outcome I promise! Just keep reading…

There’s a lot that frustrates me about my physique, which goes beyond not being as ‘skinny’ as I’d like to be. As you know, I used to play rugby. I was a healthy size 12, I trained three times a week, I ate what I liked, and I could run up my four flights of stairs without being out of breath.

None of those facts have been true for about eight years. I’m now a full hour glassed size 20, I go to the gym when I can but not as often as I should, I punish myself with my eating habits, and thanks to my recent cold I have to stop halfway up the stairs to catch my breath before carrying up the rest.

Added to this: I’ve got polycystic ovarian syndrome.

It’s an interesting little dysfunction, my ovaries cling on to eggs to create cysts. I can’t have kids, and I gain weight like crazy. My size 12 to size 20 slide didn’t take the full eight years, it’s just taken me this long to admit it. I went from a size 12 to a size 16 in months, whilst at university, and everyone told me it was Fresher’s bloating. All the alcohol and cheap pasta. But then after uni, I kept ballooning. I went to see my doctor, and she reminded me that weight gain is a side effect of POS.

‘I can’t put you on the pill until you lose some weight.’

There are other psychological factors for me hating my body but if you need to know those, my ‘Did I let anxiety win?’ blog covers most of them.

My flatmate Lina and I are going to do a ‘No Sugar for September’ challenge. 30 days of zero refined or added sugar. I really struggle to diet, I get bored easily and the moment someone tells me I can’t have something then that’s all I want. But we’re hoping that by doing this together we’ll be able to cut out sugar for a month.

I don’t expect this to be easy, I’ve got the biggest sweet tooth ever! And sugar – as I discovered when shopping yesterday – is in EVERYTHING! But I’ve got the support of my flatmate and my family, and a game plan. I’ve found replacements for the sugary things I have daily, such as tea, breakfast and lunch. And sugarless alternatives to snacks and other things like that.

I’m not entirely sure what I hope to get out of this. I’ve spent a long term trying to train myself to like my body, even a little bit. But considering I’m the only person I allow to see it in the harsh light of day – maybe I need to stop fixating and starting ‘fixing’ the problems I think I have. And this can’t hurt, right?

I’ll try to update the blog every day so you can see whether the alternatives are worth the money, how the lack of sugar impacts my mood, weight and mindset, and please – for me – treat yourself today.

Just don’t tell me about it…