I haven’t done a give-away in years, but I’m really excited about this one. And entering is really easy!

Priorities: What’s in it?

How do I enter?

Comment below with #GothGiveAway and an answer to this question:

What is the spookiest thing to ever happen to you?

You can enter AS MANY TIMES AS YOU LIKE! Each time you do, your name and story get put into a hat and on 18th October the giveaway will close and a winner revealed!

I also bought the most disgusting Spider Lollipops – so two Losers will also be picked and a thank you card and spider lollipop will go to those (un)lucky victors.

So go forth and spread the spook!

And if you haven’t yet bought your ticket for my Gothic Fiction workshop in the spooky 12th Century Castle, what are you waiting for?

*Must be UK or Ireland Resident, for postage.

*Chocolates and Lollipops are not Vegan or Gluten-Free, and contain nuts.

Back in July I wrote a blog post about music being influential on writing, explaining that writers craving silence and solitude was a stereotype and ABSOLUTELY NOT how I like to write. Click here if you want a little slice of recap.

But a TLDR is: Some writers finds the blank page daunting, and music can help break numerous barriers.

And whilst music and literature might not seem synonymous, they both have tangible effects on us as human beings. When you’re a child you learn to sing along to music, keep to a beat and co-ordinate through music, whether that’s through music lessons or simply conditioning within the home. For example, my dad loves The Squeeze, so I know all the words to Up the Junction. (Test me). Equally, your parents might have read to you as a child, instigating your journey to reading and writing. Both are creative outlets developed and intrinsic to the person developing them. They’re large parts of everyone’s lives, whether they realise it or not, and the wider you explore both subjects the more you’ll get out of life and the wider cultural world around you.

The music I play when I’m writing is always curated to suit the mood of my writing.

So, with that in mind. I’ve created a playlist for you to listen to. Check it out on Spotify (not a spon – I don’t have NEARLY enough followers for that yet) and let me know what you think. What music do you listen to when you’re writing?

Okay, so… your first question might be – what is Gothtober? Or it might be, why? Both are reasonable. And I can explain.

When I was a little girl, I wanted to be a princess. *Cue the sicky noises. But, after my mum introduced me to some real princesses (the pageant kind) who wanted to borrow her very expensive dresses, parade about in them and smile – a lot – I decided being a princess probably wasn’t for me.

Skip twenty(ish) years – I’m definitely NOT a princess. Thank (insert preferred deity here). But that doesn’t mean my interest and love of the fantastical has died. In fact – quite the opposite. I get to visit castles, wear ball gowns, tame dragons (though the last bit isn’t in the literal sense) all the time. And I realised some months ago – I’m really lucky, and I had the opportunity to let people in on the party.

So back to your first question: What is Gothtober? Well, it’s 31 days of blog posts, pictures, games, videos, giveaways, and Q&As about Gothic Fiction, Ghost Stories and the dark underbelly of the fantasy worlds living in our heads. It’s a calendar count down to my event – Creative Writing Workshop – Gothic Fiction – and a sneak peek to the event itself. You see, Gothic Fiction is the Great Grandfather of all your favourite genres – Murder Mysteries, Horror, Thriller, Fantasy, Historical Fiction and Science Fiction. They all stem from the Gothic. And if you want to develop your writing – it might be a fun little exercise to try writing some Gothic Fiction of your own.

And – why Gothtober? That’s easy. 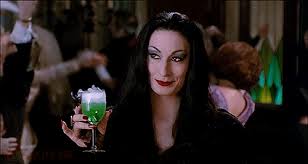 You see, once I got over the whole ‘wanting to be a princess’ I decided I wanted to be Morticia Addams. She has way more fun.

So enjoy this excuse to lacquer your nails in black, pull out your darkest lipstick, and listen to some dark and moody tunes, and don’t forget to comment below with your favourite Goth.