Way back when – when ‘drama’ wasn’t twitter beef or insta hashtags, but something people did for entertainment and to win a goat (actual facts, look it up), there were two main types.

Comedies would be filled with lots of little mishaps, but inevitably ended up with a cathartic happy ending.

Tragedies – didn’t. They would be filled with comedic elements, but make you cry your little eyes out. And the British – if I do say so myself – are really bloody good at comic tragedies. Victoria and Abdul is an example of this.

The screenshot opens in Agra, our lead (played by Ali Fazal) begins his morning with prayer. The camera then follows him walk through Agra to where he works, following his feet with only a few shots of his face. We meet exactly one English soldier on his way to work, who is rude and obnoxious and calls Abdul Karim and ‘idiot’. Now, English comedy (at least from where I’m sat) has always played on how aware it is of the classic ‘Englishman’. Here we have a British film, showing the audience how ridiculous British-isms are. There’s no doubt the Englishman is rude, but Abdul carries on his way – showing that this behaviour is the norm, the English ruin everything (even a nice walk to work) and everyone else just ignores them.

This is then carried on for the next sixteen minutes, hammering home the idea that English traditions are completely underwhelming or simple-minded to those looking from the outside in. There’s a great juxtaposition between the two ‘Hindus’ as they keep being called. One is excited to be in England, one can’t wait to be home. This second character (played by Adeel Akhtar) even goes as far as to compare the English to ‘Barbarians’ because of what they put in sausages. The two Indian men are told their new costumes were designed to look ‘authentic’ even when Abdul points out they’re nothing like the traditional costumes. And they look so bored!

As course after course of food comes out, there are casual side glances, rolling eyes, stares, and sighs. All little details that show how disappointing the whole thing is. But what makes this absolutely genius is Queen Victoria (played by the true queen herself Judi Dench) is asleep. She’s awoken to receive a coin, makes eye contact Abdul and the opening titles (16 minutes in mind…) flash across the screen practically screaming – this is it. This is the relationship that could save her. If you’d like to know more about their true relationship, Vanity Fair has written an amazing article all about it.

The queen is, at this moment in her life anyway, bloody miserable. Her husband is dead, her lover is dead, her children are horrible and she’s sick of being bossed around. She’s clearly dying of boredom and because the English can’t help themselves, there are even jokes about her constipation. But here is this person, a complete contrast to everyone she knows. He’s excited to talk about carpets, to teach her his language, to talk about what being a Muslim is like and she’s revived by his enthusiasm. She encourages him to bring his wife to England, and unlike everyone else, isn’t terrified of this woman whose face is covered up or different. It’s exciting. And it’s lovely to watch. 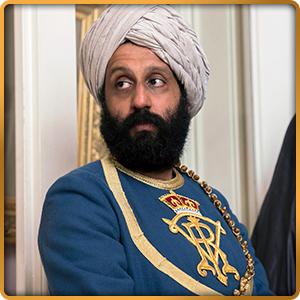 Which means the moments of contrast are stark and terrifying.

Servants shutting doors in Abdul’s face, being put in cold and isolating dorms, but most importantly – the constant backstabbing.

Bertie, Prince of Wales (played by Eddie Izzard) is a nasty, scheming little man who begins with the household – who already are at odds with Abdul – and then with Abdul’s friend Muhammed.

This is where Muhammed becomes my favourite character. His speech to the Prince is 10/10. He refuses to sell out his friend, well aware that he is dying because of the awful English weather. He’s proud of his friend for playing the game so well, and when he dies (I did warn about spoilers) the English are there to ruin it again.

Because everyone is so focused on making sure the queen is okay, his death passes with only two moments of note. The first is when Abdul’s serving boy runs up to Abdul to tell him about Muhammed, and the next moment is his funeral. I was seconds away from tears.

Abdul is then alone – as his wife and mother-in-law get 0 lines – with only the queen to protect him. The court are on his back constantly, looking for any reason to have him removed. And once the queen dies, he’s sent back to India and all of the letters and journals they shared together where destroyed. Now I’m for real crying. Damn you. Damn you cinema!

The film comes full circle, with Abdul waking up in Agra, and then walking through the streets. He returns to the Taj Mahal gardens, where a large statue of Queen Victoria has been put up and he keeps his promise to stay by her side. And isn’t that bloody lovely/heartbreaking.

I spent a lot of time talking about the money with Big Hero 6 – because I wanted to make a point that whilst I didn’t like it, clearly others must because it rolled in the dollar as it were. Victoria and Abdul have done pretty well, grossing $61,000,000 worldwide so far. I, personally, think it’s worth all of the awards. And has redeemed Stephen Frears after Tamara Drewe for me.

Let me know in the comments below if you agree or disagree or if you want to share your opinion. See you tomorrow!

This whole blog is about me; so enjoy the narcissism! View all posts by Hannah O'Donnell